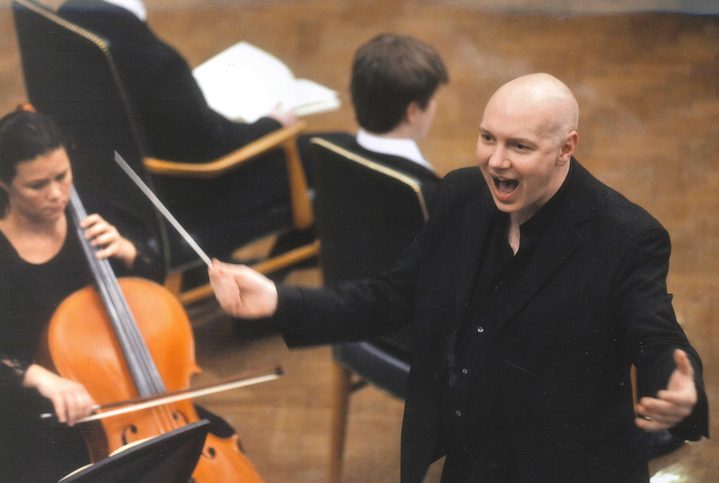 He is perhaps unusual in having appeared as a conductor, singer and flautist on BBC Radio 3. He began conducting at an early age, and was selected to take part in a conducting masterclass with the National Youth Orchestra of Great Britain, with whom he was principal flute. At university, he founded the Manchester University Mozart players and conducted the New Music Ensemble.

As well as the being the Musical Director for the Hampstead Chorus, he is currently the conductor and artistic director of the Amici Orchestra (London). Simon is committed to performing new music and is a founder member and regular conductor of the Vocal Constructivists, whose recent CD Walking Still has received outstanding reviews in the national press:

“This recording is fabulous… Everyone needs a disc of offbeat contemporary music on their shelves. Start with this one.” (theartsdesk.com)

“Formed in 2011 the group has brought the exuberance and playfulness of experimental music to live audiences” (Independent on Sunday).

He has been invited as a guest artist, conductor and speaker by the English universities of Southampton, Christchurch Canterbury and King’s College London and internationally at Wesleyan University USA and the Royal Irish Academy of Music.

Simon is a senior coach for the Grittleton summer residential adult chamber music courses, covering a wide repertoire from the western canon to contemporary music, specialising in music for mixed ensembles due to his experience as a multi-instrumentalist.

Simon is also active as a singer. He made his operatic debut in the role of Luigi (Il Tabarro) in 1996. Specialising in ‘lyrico spinto’ repertoire, other principal roles have included Turrido (Cavalleria Rusticana), Edgardo (Lucia di Lammermoor), Macduff (Macbeth), Loge (Das Rheingold), Samson (Samson et Dalilah) and Florestan (Fidelio).  He has appeared and recorded with Kent Nagano and the Opéra de Lyon, Claudio Abbado and the Berliner Philharmoniker and the choirs of the London Oratory and Westminster Abbey.

Simon has been invited to premiere two new operas, creating the role of Frank Troy in Far from the Madding Crowd by Andrew Downes, commissioned by the Hardy Society in 2006, and the role of Pierre Joubert in The Raffle by Richard Springate in 2011.  Oratorio performances include Verdi’s Requiem, Puccini’s Messa di Gloria and Mendelssohn’s Elijah.  In a broader musical context Simon has worked as a professional accompanist on the piano, an instrument on which he has also recorded Saint-Saëns Septet and performed Rachmaninov’s 2nd Piano Concerto.  In 1993 Simon was invited to write Young Musician Plays Flute (Watts Aladdin Books, London) as part of their education series, a flute teaching book which has since been translated into several languages.

Simon appeared as tenor soloist in Handel’s Messiah in 2008, the first concert put on by the UCS Centenary Choir Concert (our previous name)