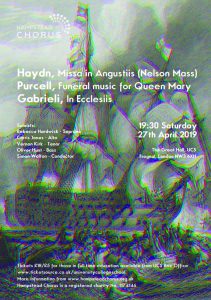 Our next term started on Wednesday 9th January with rehearsals for Nelson Mass by Haydn, Funeral music for Queen Mary by Purcell and In Ecclesiis by Gabrieli.  Rehearsals are on Wednesdays at UCS – with  breaks for half term and for the Easter holidays.

Our concert will take place on Saturday 27 April 2019 in the Great Hall at UCS.  It will be conducted by our Musical Director, Simon Walton and accompanied by professional soloists and orchestra – as usual.  Tickets are available online via Ticketsource (with a booking fee) or at rehearsals.

If you have not yet registered but would like to sing, please come along to a rehearsal to register.

The subscription for this term will be £75, of which £60 represents the term’s fee and £15 the cost of tuition; this is equivalent to less than £6 per rehearsal.

The score of the Haydn Mass will be available for £15 but we have very few copies left – we will do our best to provide you with a score but you may need to obtain your own. We will be using the Barenreiter edition (the same edition that we used when the choir last sang this piece in 2010).  The total cost for those subscribing and buying a copy of the Haydn from us will therefore be £90. We will provide free photocopies of the Purcell and the Gabrieli for all singers.

Full details of the rehearsal schedule are on the document which you can access HERE.

John Fletcher’s Music (you will need to register on this site).

There are also Youtube versions with the music on the screen (Google “choirparts Nelson Mass” and your voice part).

John Fletcher’s Music (the movements we sing are included as separate items under their individual titles).
There are also Youtube versions with the music on the screen.

Learn Choral Music
There is also a very interesting A level study guide on In Ecclesiis on Youtube.

YouTube and Spotify both have many recordings.
Hickox is always worth listening to and this YouTube recording has the music on the screen. Otherwise, there are good recordings by Trevor Pinnock and Gardiner (click on the names for the links for YouTube – both are also on Spotify).

We are singing the three anthems originally composed as part of the Funeral Music, along with an additional two anthems.  This means that there is no recording which exactly matches what we will sing.  Simon writes:
Tim Brown and the Choir of Clare College, Cambridge have a disc called Purcell: Sacred Music and Funeral Sentences for Queen Mary. This has nearly everything we are singing on it, other than Thou Knowest Lord. The version on the album is Purcell’s first and less well known version of that anthem rather than the one we are doing.  You can find most of the tracks on this album on YouTube and are all on Spotify.
Love’s Goddess Sure Was Blind, by The Sixteen and available on Spotify, is a good recording based around the Funeral Music – this has both versions of Thou Knowest Lord.  Some of the tracks are also available on YouTube.
YouTube also has a John Eliot Gardiner sequence, which has the same pieces we are doing in the same order (i.e. with the trumpet and drum insertions) – unusually for him, some of the choral music is rather slow.

FacebookTwitterRedditLinkedInTumblrPinterestVkEmail
This site and its third party application use cookies to understand who uses the site and how they get here. Find out more.
Go to Top